Menu
Log in
Register
Install the app
You are using an out of date browser. It may not display this or other websites correctly.
You should upgrade or use an alternative browser.

The gaslighting of America...

So, you acknowledge that the Biden crime family is a thing?
Biden has been signing the back of a gov't check and booty popping the taxpayers for at least 3 decades. All the while Trump org was building hotels, ice skating rinks, golf courses, posh resorts, painting his name on the side of his own jumbo jet, etc. For the sake of argument, let's say there is modicum of truth in what you said. You would/should be okay with a full scale investigation into the Biden crime family then? How about %50 of the effort that's been put into investigation Trump org is put into investigating Biden? I mean nobody wants criminals running the country, right? 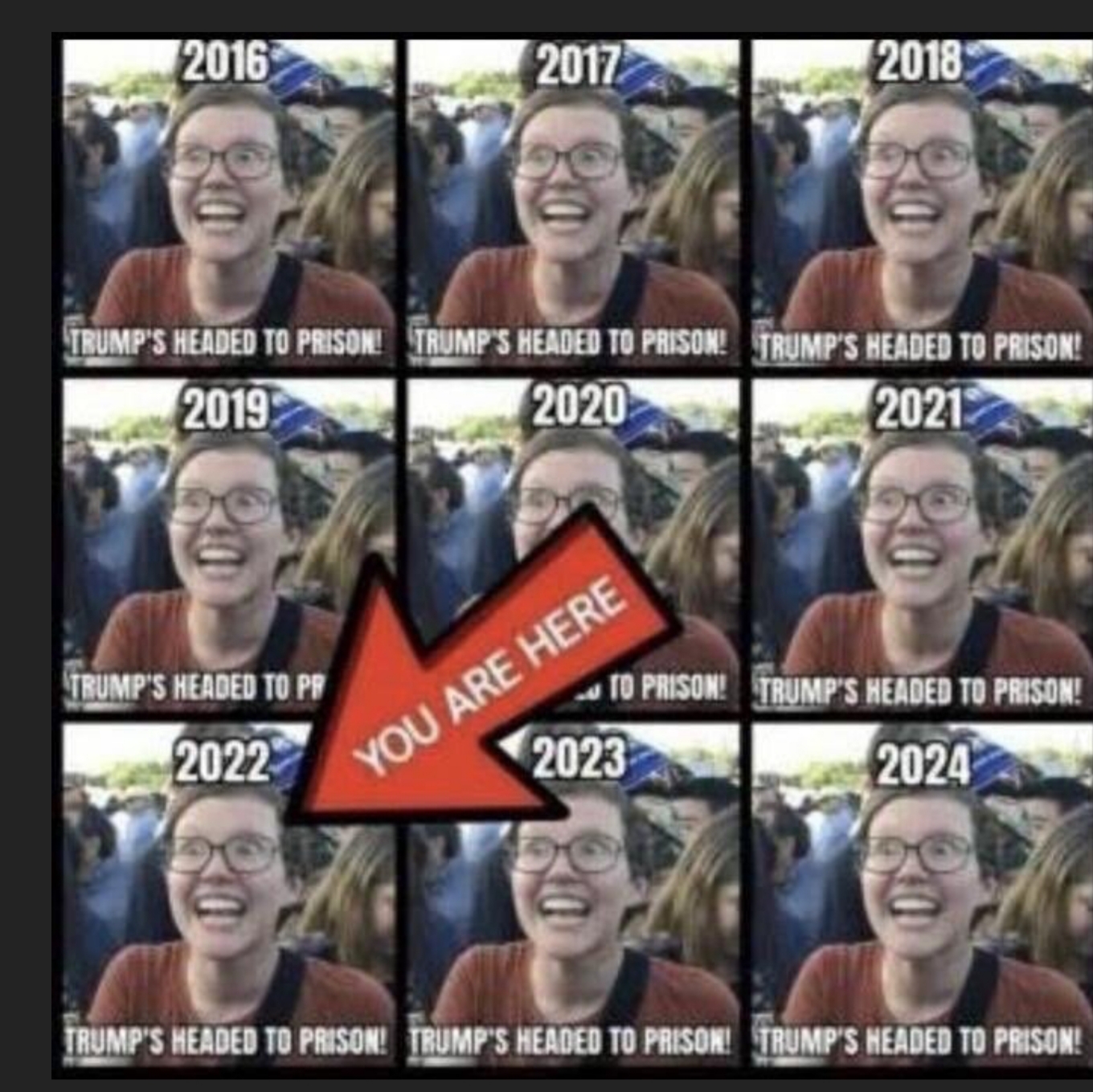 I'm sure the Biden crime family has learned a few things from the Trump crime family.
No worries.
Click to expand...

What a F'ing JOKE! This doesn't deserve a response...the entire thread is a joke. Pot calling the kettle black. And the pot is VERY VERY black.

Yes. I think even rich and powerful people should go to jail when they break the law. Same as the little guys. There's your response.

Kirb, jokes are supposed to make you laugh. Somehow, I don't think that you're laughing. In fact, I get the feeling that you're angry. Which is quite puzzling considering all of the good things going on (that I mentioned in an earlier post) high gas prices, record inflation, and your T'giving dinner is gonna cost %40 more than it did 2 years ago, etc. I'm pretty sure you voted for all this. Prez Joe even said himself, when asked if he was going to change anything going forward over the next 2 years, his response was, "No." So, come on. Celebrate! No mean tweets or $2 gas. Gobble gobble....

kirrbby said:
What a F'ing JOKE! This doesn't deserve a response...the entire thread is a joke. Pot calling the kettle black. And the pot is VERY VERY black.

Yes. I think even rich and powerful people should go to jail when they break the law. Same as the little guys. There's your response.
Click to expand...

You are a joke. And No, you're not funny.
You are just stinking the place up.

Geeze Loiuse. Straight. Up. Lying. She knows she's lying. The entire room knows shes lying....
Typical how she turns the argument to republicans and how they are "working with us." That's laughable. Anybody that tries to bring up the border problem is immediately called racist, homophobe, xenophobe, MAGA-extremist, White supremacist, etc. That's all they got.....call names. All in the name of unity.

"The idea, the idea we still allow semi-automatic weapons to be purchased is sick. Just sick. It has no no socially redeeming value. Zero. None. Not single solitary rationale for it except profit for the gun mfg."
Really? "we still allow????? WTH??? Allow???? Its called the 2nd amendment you babbling buffoon. I wonder if he is alarmed about his son, Hunter, buying a semi auto handgun, ILLEGALLY? It's all been covered up. Now, you law and order types that want equality and equal protection and all of the virtue signalling cliches should be screaming from the roof tops.


Looks like the secret service "stepped in" and "took care of it." Secret Service Repeatedly Changes Its Story on Hunter Biden Gun RecordsThe United States Secret Service has repeatedly changed its position on whether it is in possession of records related to the investigation of Hunter Biden’s gun, which was reportedly disposed of in a dumpster in Delaware.The...
www.judicialwatch.org

The United States Secret Service has repeatedly changed its position on whether it is in possession of records related to the investigation of Hunter Biden’s gun, which was reportedly disposed of in a dumpster in Delaware.

The agency now says it has located more than 100 records, totaling over 400 pages, but won’t complete its initial processing of them until January 9, 2023.

We are investigating whether and how the Secret Service intervened for Hunter Biden in an incident involving a gun he allegedly owned. In September, we filed a Freedom of Information Act (FOIA)lawsuit for records or communications about the reported purchase, possession, and disposal of a firearm owned by Hunter Biden found in a Delaware dumpster in October 2018 (Judicial Watch, Inc. v. U.S. Department of Homeland Security (No. 1:22-cv-02841)).

The Secret Service initially responded to our request on April 2, 2021, stating that it had located potentially responsive records and would process them in accordance with FOIA. Then, on October 13, 2022, the agency said the April 2021 response was sent in error and that it did not have any records responsive to the FOIA request.

Then, on November 10, 2022, the agency informed the District Court that it has run supplemental searches and has located over 100 records, totaling over 400 pages, potentially responsive to our request.

Is it simply coincidence that the second message from the Secret Service came after the November 8 midterm election?

The Secret Service’s changing story on records raises additional questions about its role in the Hunter Biden gun incident. One thing is clear: Our persistence means the public may get records that the Secret Service suggested didn’t exist.

In October 2020, The Blaze reported that in October 2018, Hunter Biden’s handgun was taken by Hallie Biden, the widow of then-presidential nominee Joe Biden’s son Beau. In 2021, Politicoreported:

Hallie took Hunter’s gun and threw it in a trash can behind a grocery store, only to return later to find it gone.

Delaware police began investigating, concerned that the trash can was across from a high school and that the missing gun could be used in a crime, according to law enforcement officials and a copy of the police report obtained by POLITICO.

But a curious thing happened at the time: Secret Service agents approached the owner of the store where Hunter bought the gun and asked to take the paperwork involving the sale, according to two people, one of whom has firsthand knowledge of the episode and the other was briefed by a Secret Service agent after the fact.

Our investigation of Hunter Biden includes:

In October 2022, we filed a FOIA lawsuit against the Department of Justice for all records in the possession of FBI Supervisory Intelligence Analyst Brian Auten regarding an August 6, 2020, briefing provided to members of the U.S. Senate. Ron Johnson (R-WI) and Chuck Grassley (R-IA) raised concerns that the briefing was intended to undermine the senators’ investigation of Hunter Biden.

In December 2020, we received records from the State Department tying Hunter Biden’s Burisma Holdings’ lobbying operation to an influence-peddling operation involving the Clinton campaign during the 2016 election. Also uncovered were State Department records showing that former U.S. Ambassador to Ukraine Marie “Masha” Yovanovitch had specifically warned in 2017 about corruption allegations against Burisma Holdings.

In October 2020, we revealed State Department records that included a briefing checklist of a February 22, 2019, meeting in Kyiv between then-U.S. Ambassador to Ukraine Marie Yovanovitch and Sally Painter, co-founder and chief operating officer of Blue Star Strategies, a Democratic lobbying firm which was hired by Burisma Holdings to combat corruption allegations. The briefing checklist notes that Painter also planned to meet with Foreign Commercial Service (FCS) Officer Martin Claessens “regarding the Burisma Group energy company.” (Painter was implicated in the Clinton-erafundraising scandal we exposed. It involved the alleged sale of seats on Commerce Department trade missions to Democratic National Committee donors.)

In September 2020, State Department records revealed a January 17, 2017, email from George Kent, the Obama administration’s deputy assistant secretary of state in charge of Ukraine policy, which was copied to then-U.S. Ambassador to Ukraine Marie Yovanovitch, highlighting Russia-linked media “trolling” Joe Biden over “his son’s business.” An email was sent four days prior to the inauguration of President Donald Trump to a redacted recipient and CCd to Yovanovitch with the subject line “medvedchuk-linked vesti trolls Biden.” Kent writes: “Burisma – gift that keeps on giving. (With medvedchuk affiliated Vesti pushing the troll like storyline on visit day)”

In June 2020, U.S. Secret Service records showed that, for the first five and a half years of the Obama administration, Hunter Biden traveled extensively while receiving a Secret Service protective detail. During the time period of the records provided, Hunter Biden took 411 separate domestic and international flights, including to 29 different foreign countries. He visited China five times.

We are also suing the DHS for Secret Service records on Hunter Biden’s travel and security costs, andsuing the State Department for messages sent through the SMART (State Messaging and Archive Retrieval Toolkit) system that mention Hunter Biden.